October was a busy month at JWP. In addition to the Khitai Kickstarter, which closed last week at just over $200,000, we’ve been working to onboard new production staff to meet the evolving demands of the company. Thanks to everyone who came on board for Khitai, and thanks for your patience this month and last while we worked through some changes in our schedule.

We delayed the October production update for a few reasons: First, training new staff to support our ever-growing production needs. Second, working with our printer to address how November and December holiday closures would impact our estimated ship dates. And finally, talking with our own team—the writers, artists, and developers working on 7th Sea—about how they’re feeling now that they’ve seen seven (yes, seven… New World is at the printer now!) 7th Sea books to completion.

Despite what it may look like, John Wick Presents is a small company. Aside from John, we have very few full-time staff members, with most of the team working part-time or on a per-project contract.

Over the past year and a half, the JWP team has worked around the clock to deliver books to your door. It’s work we’re excited to do, but after putting out a whole lot of sourcebooks this year, we’ve come up against exhaustion and staff burnout, something we really want to avoid! Burnout contributes to industry turnover, introduces mistakes in processes and communication, and makes it pretty much impossible to maintain a sustainable business that makes quality material.

To keep our staff healthy and to keep producing books that match the high standards we’ve set, we’ve made a decision to slow down the aggressive pace of our production schedule. This conversation started as we worked with our printer as mentioned above, and after talking it over with our creative team and our distributor, we’ve decided a slower production schedule is the one thing that will ensure a happy, healthy game line moving forward. Here is what that schedule now looks like:

We hope you’ll take the sourcebooks you’ve already seen (Pirate Nations, Nations of Théah, Crescent Empire, and more) as proof that we’re here for the long haul and committed to ongoing support for 7th Sea Second Edition. As always, we appreciate your support and enthusiasm, and look forward to delivering you more books next year!

We have a draft preview, sans art, available of Cities of Faith: Vaticine City! This supplement gives you an in-depth look at the heart of Vaticine politics and provides locales, hooks, and adventure seeds for a long stay in the City of Theus.

This preview has been pushed out to backers via Backerkit. If you didn’t get an email from Backerkit, you can grab the file directly from the Backerkit Digital Downloads page:

Our thanks go out to our developer for the project, Jesse Heinig, as well as the rest of the designers, writers, editors, artists, and consultants that helped make this happen. We're also looking forward to setting our senior art director, Marissa Kelly, loose on this iconic locale.

As before… please don’t email or post in the comments with your feedback. With over 11,000 backers, that would overwhelm our ability to deal with emails and comments. Instead give us feedback via this link by December 1, 2017 at 10:00pm Eastern:

We hope to have the final version of Vaticine City available early next year for PDF download, and we hope you enjoy the preview!

New Adventure: Op’a on Board on DriveThruRPG 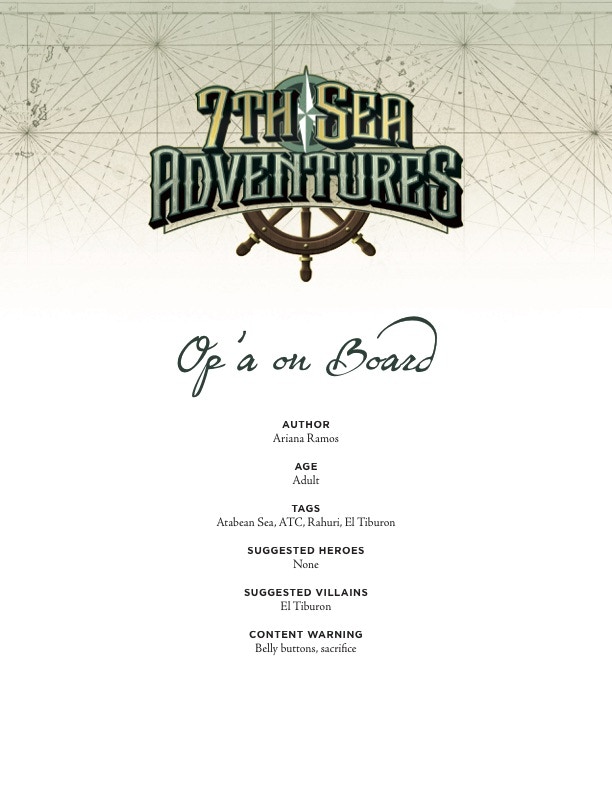 Op'a on Board: a Pirate Nations adventure

Our next adventure for Pirate Nations, written by Ariana Ramos, pits the Heroes against a powerful, mischievous adversary from Rahuri legend—the Op’a, a supernatural trickster that connects living souls to the Land of the Dead. You can pick up this new adventure for 7th Sea on DTRPG:

The office will be closed the rest of the week for Thanksgiving, but we’ll be back in the saddle on Monday, November 27th. We’ll be spending the rest of the year hitting our final milestones on the way to our current production goals, doing some internal bookkeeping, and closing up shop mid-December to relax and get a holiday break. Then we’ll be back starting January 8th, ready to keep sailing the Seven Seas, and we look forward to having you along on the voyage. Thank you!

'Sorcery' for Vaticine faithful is interesting. (I prefer that they decide to just use the Sorcery mechanic than create a new one for this).

I would also say that the various heterodoxies and expansion of the Vaticine faith makes it a more rounded thing than 'fantasy Catholicism'.