It’s hard to believe a year has passed since 7th Sea: 2nd Edition was released at Gen Con 2016. Since then we’ve seen the release of five sourcebooks, a new 7th Sea podcast, two novels, the Pirate’s Booty, the Explorer’s Society on DriveThruRPG and more. It’s been a busy year for 7th Sea… and we’re not done yet!

In just a few days, John and the crew will be traveling to Gen Con 50. We’ll have the core rulebook and all of the currently available sourcebooks on hand, John’s complete indie game catalog, the Pirate’s Booty accessories, the 7th Sea novels and a very special surprise for Gen Con attendees... 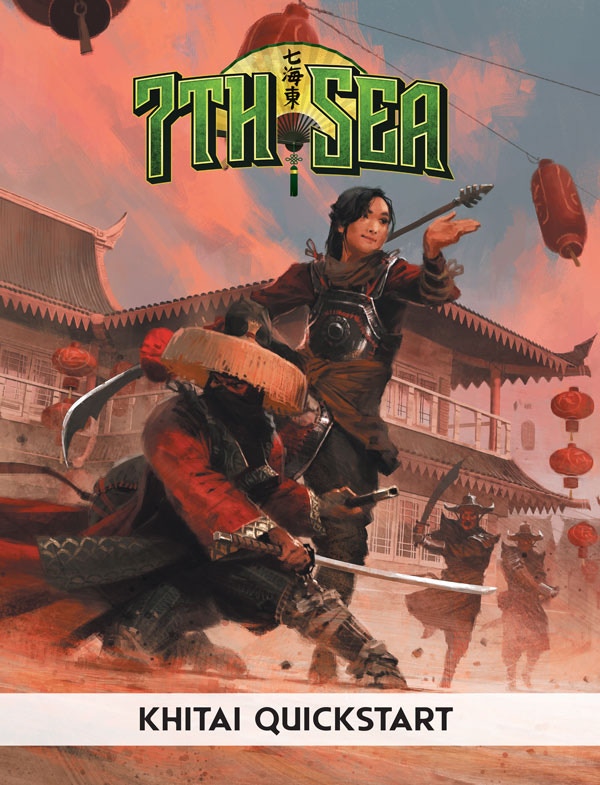 The Khitai Quickstart is here

If you’ll be at Gen Con in Indianapolis next week, visit the John Wick Presents booth (booth 2338) to pick up an advance preview copy of the 7th Sea: Khitai Quickstart. We’ll have a limited number of quickstart copies available, so be sure to stop by early to ask us about Khitai. We’ll dip into our secret stash and slyly slide a quickstart your way.

The quickstart includes a preview of seven new nations, including:

In addition to the four nations not mentioned here, the Khitai Quickstart also includes a mechanics overview, new sorceries, and an introduction to The Song of the World—the pull towards duty and destiny that sets a Khitai hero apart from the heroes of Théah. 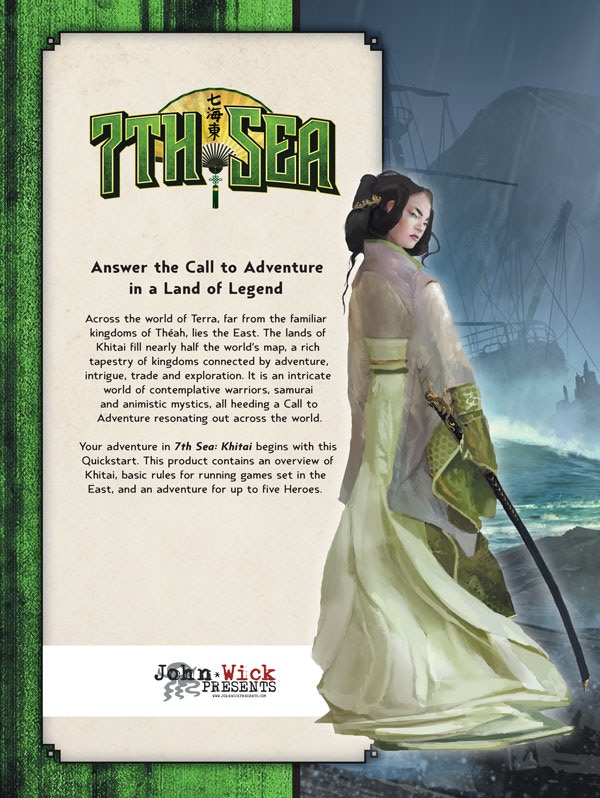 Answer the Call to Adventure in a land of legend

If you won’t be at Gen Con, that’s okay! John Wick Presents will be launching the Kickstarter for 7th Sea: The East this September. We’ll also be uploading the quickstart PDF to DriveThruRPG after Gen Con, so it will soon be available for all to download for free.

Meet heroes bound by honor and a duty to serve the World. Explore the nations of Khitai, with histories spanning back thousands of years. Play out stories inspired by the likes of Seven Samurai, Avatar: The Last Airbender, Crouching Tiger, Hidden Dragon and more. There are so many different kinds of heroes in the world and so much of the world of Terra left to explore. We can’t wait for you to join us on a journey to the East! 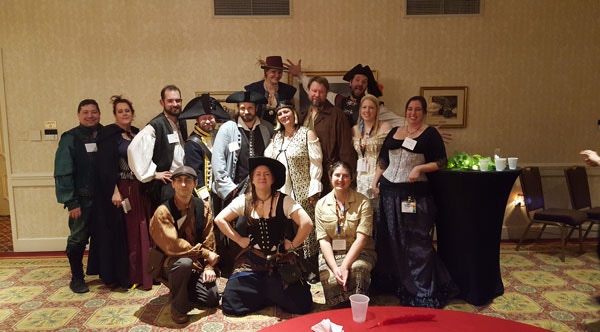 Freiburg Haunting sets up the events of the weekend by introducing the Heroes to Eisen and a strange mystery occurring around Freiburg. The Heroes must decide how best to handle what they find. This event will lead into the final event, Council of Princes, and Hero actions will influence story elements. Join us as we explore the dark forests of Eisen in an afternoon of swashbuckling adventure.

Council of Princes is the culmination of the weekend, where the Heroes will help decide the fate of Eisen. The circumstances of this event are still unknown, influenced by the Heroes' actions in the Freiburg Haunting events, where the Heroes must decide how to handle a strange disturbance to the land. Participation in the previous events is unnecessary. Join us in our grand finale for the Gencon weekend and help us decide how Eisen will answer this threat in an afternoon of swashbuckling adventure and political intrigue.

Curious about the LARP but not sure if it’s for you? LARP developer Danielle Lauzon gave a wonderful sneak peek in last month’s episode of the Spirit of the 7th Sea Podcast. Listen here.

7th Sea novels are up in the webstore this week, Crescent Empire is headed to DriveThru and the sea shanty album is almost ready for its public debut. As we gear up for the East Kickstarter, we’ll also be revealing more about Khitai in coming weeks. Stay tuned!

...Is it bad that i want the quickstart to be a digital release? For the East kickstarter at the very least.

It says in the update that the East quickstart will be on RPGNow after Gen Con.

And we have a date for The East. She is called Third October.