Lots to catch up on today! In addition to the official release of The Crescent Empire on PDF to backers, we’ve got paperback novels, the full suite of accessories (decks, GM screen, etc) on PDF, and our August production update!

Now that we’ve resolved The Crescent Empire through print proofing, we’re ready to release the PDF to backers via Backerkit: 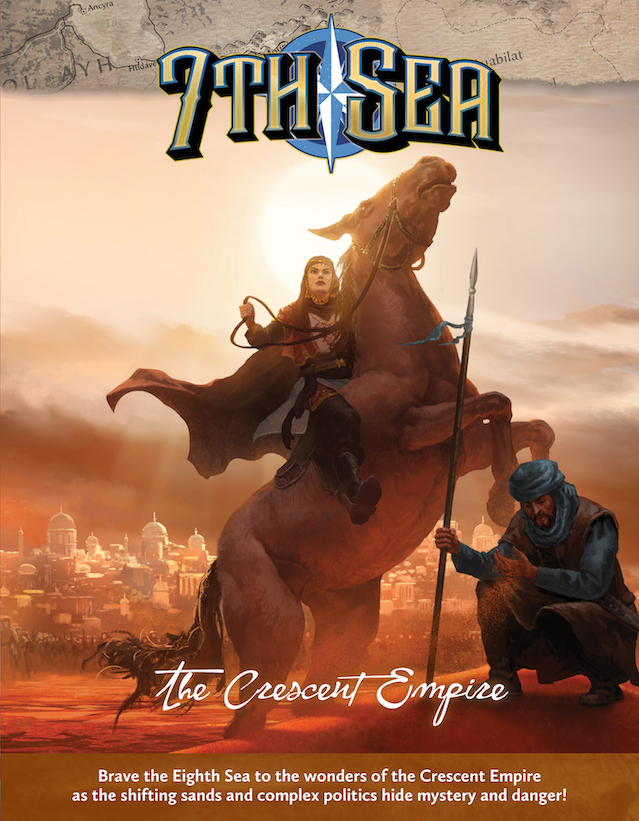 In an ancient land of sand and sun

Those who burn brightest cast the longest shadows.

When the rightful empress returned home to reclaim her throne, the empire rejoiced. As the empire awakens to a new dawn, Anatoli merchants to Sarmion nobles work towards a new life, holding close the ideals which make the empire strong—family, honor and kindness.

However, progress is not made without pebbles in the sand. The dethroned sultan plots to recover his throne and his lover, controlled by an otherworldly force, seeks to aid him. Jinn have awoken hungering for the power over mortals they had many years ago...

Will the empire fall under these threats? Join the fight for the empire’s bright new destiny!

Look for the full Crescent Empire PDF to go on sale next week on DTRPG! We’ll have print copies out to backers around September 5th and up for sale on our webstore by the end of September.

Just in time for Gen Con, we’ve received paperback print copies of the first two novels: Daughter of Fate and Born Under the Black Flag: 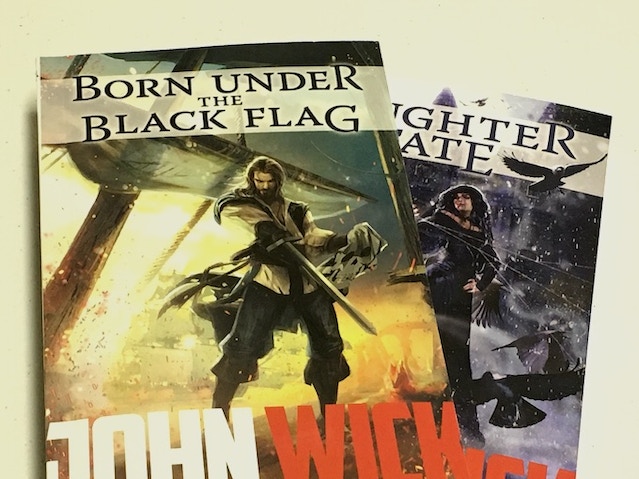 As with our sourcebooks, we’ll be running the delivery for these books through our webstore via coupon codes delivered through Backerkit. We’ve already pushed those coupons out via email, but if you didn’t get an email, you can grab your coupon directly from the Backerkit Digital Downloads page:

And if you didn’t yet purchase a paperback copy of either of these novels and want to pick one up… now is a great time to buy your copy direct from our webstore:

The hardback books will take a bit longer to arrive, but we expect them in September. We’ll push those coupons out to you all as soon as we have the books in stock!

If you’re going to be at Gen Con this week, you can also pick up your book directly from us at our booth. Just fill out the below form, and we’ll have your book ready for pickup anytime during the convention:

Due to popular request, we’ve updated the Backerkit Digital Downloads with PDFs of the GM Screen, Sorte Deck and Hero and Villain Decks. We hope you enjoy them!

We’ve also received word from our printer that the replacement cards for the Hero and Villain Decks are shipping this month. Since those are shipping directly from the factory in China, they may take a few weeks to arrive, but we expect them to be in your hands by the middle of September. We’ll update you all after Gen Con about specific dates and any tracking information we get from the factory.

While the summer has been quiet, we’ve been making progress on the remaining pieces of the 7th Sea: Second Edition Kickstarter. Below are the updates for changes in status; remember that you can view the full production schedule here:

We continue to make good progress on the remaining 7th Sea sourcebooks: Nations of Théah: Vol 2 shipped to backers and arrived in retail stores at the end of July, The Crescent Empire is at print and The New World is in layout. Hurray! Huge thanks to Danielle Lauzon for taking on new development duties with The New World to get it across the finish line.

Both Lands of Gold and Fire and The Colonies are still in dev editing, but we expect to see them in PDF in Quarter 4 with print books close to follow. Both sourcebooks are moving along nicely, but we want to make sure we give ourselves plenty of time to finalize art and layout for these new lands. Cities of Faith is finalizing dev editing as well, so expect to see that book heading to copy editing and layout in September as well.

Mark Richardson is hard at work finalizing both the Aztlan map for The New World and the full maps for The Colonies, both are the last maps we need before we ship out the final piece of the Pirate’s Booty Box pledge tier. Look for those in October, once Mark has a chance to wrap up the remaining maps and put together our first “Map of Terra”...

Finally, we’re shipping out our first set of paperback novels (Daughter of Fate and Born Under the Black Flag) this week now that we’ve resolved all the cover issues. The hardback versions will take a little longer to arrive, but we expect those to ship in September. Meanwhile, John is hard at work on Gossamer Empire...

Now that we’re reaching the end of the 7th Sea Kickstarter, we’ve got some cool new stuff planned for the remainder of 2017… and beyond. Stay tuned next week for a special update on some of our Gen Con promo materials, including a sneak peek at some long-awaited projects. Thank you for all the support!