May is here and we’re excited to share another production update… including the arrival of the long-awaited Pirate’s Booty! Yarrrr!

The arrival of the Pirate’s Booty box means that we’ll also have those components for folks who ordered one or more accessories without getting the full box. If you’ve been waiting to get your Sorte Deck, dice, tokens, GM screen, or deck of Heroes/Villains, this is your moment! 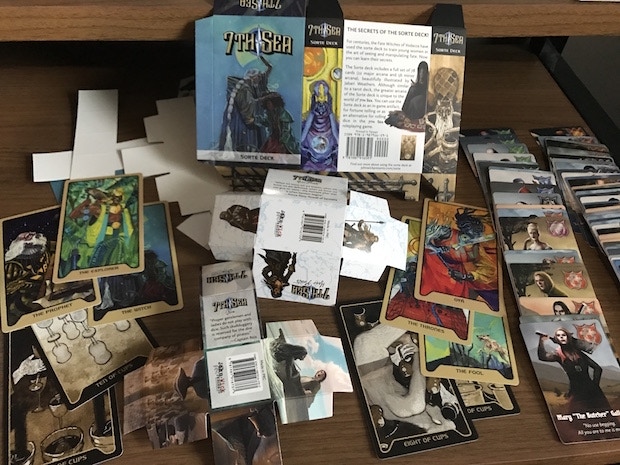 As with the previous rewards, we’ll be running delivery for the Pirate’s Booty and all the components through our webstore via coupon codes delivered through Backerkit. We’ve already pushed those coupons out via email, but if you didn’t get an email, you can grab your coupon directly from the Backerkit Digital Rewards page:

Here’s how to claim your rewards from our website:

Note that your coupon entitles you to free shipping for your rewards, which applies to any other books or accessories you add to your order as well (like an additional Core Rulebook, Heroes & Villains, a set of dice, or any other JWP product!) This coupon is also good for one year, so you can wait to use it if you’re about to change your address or want more than one thing delivered at a time.

If you didn’t purchase any of the Pirate’s Booty rewards during the Kickstarter and you’d like to pick something up, you can also buy any of these rewards from our webstore while they’re still available:

Also please note that the maps aren't ready yet. We're still finalizing The Crescent Empire, Aztlan, and Ifri, so look for those maps a bit later this year!

We know you’ve waited awhile for these rewards, and we’d like to ask for your continued patience while we work on shipping them out to you. With more than 2,500 GM Screens, 2,000 booty boxes, 1,600 individual Sorte decks, hero points, etc., this will be our biggest shipping project since the Core Rulebook. It’s a lot of stuff!

If you don’t get a coupon or still don’t have your pieces in a few weeks (June 15 domestic / June 30 international), please let us know and we’ll figure out what went wrong! Kickstarter messages are preferred, but you can also send us an email at info@johnwickpresents.com.

The Pirate’s Booty represents a big milestone for us. While we still have a number of books to deliver, we’re more than halfway done with all the rewards we’re going to deliver!

We’ve got a bunch of good news this month in addition to the Pirate’s Booty shipping. Both Nations of Théah books are on their way out to backers shortly, the Storium Deck is almost done and we’ve got a new preview of John’s next novel!

Nations of Théah: Volume 1 is wrapping up at the printer and headed our way soon. We’ll be shipping it out around the 6th of June, so stay tuned for more print coupons coming your way in a few weeks. We just turned around the proofs for Nations of Théah: Volume 2 as well, so we’ll have that out to backers at the beginning of July! Yay! You’ll see both books in retail stores shortly after they go out to all of you.

The Crescent Empire has made some great progress this last month, so we’re moving it ahead of New World a bit in the schedule. We expect to have the PDF of The Crescent out next month for you all to review. We’re really excited about the next few sourcebooks, all of which explore the non-Théan parts of Terra.

Stay tuned for an update on our Storium Deck in the next month. We’ve handed the files off to Storium, including some amazing art from the books, and we’re expecting to get that stretch goal marked off our list soon.

Finally, we’re having a bit of trouble finalizing the colors on the cover to Daughter of Fate. We still expect that book to ship in June, but we want to make sure it looks great. We’re currently working with the artist to revise the cover. As for Born Under the Black Flag...

Born Under the Black Flag Preview

Have you already finished reading Daughter of Fate? If not, time to get reading! We’ve already got another 7th Sea novel headed your way. The early release of Born Under the Black Flag is ready for review and proofing. 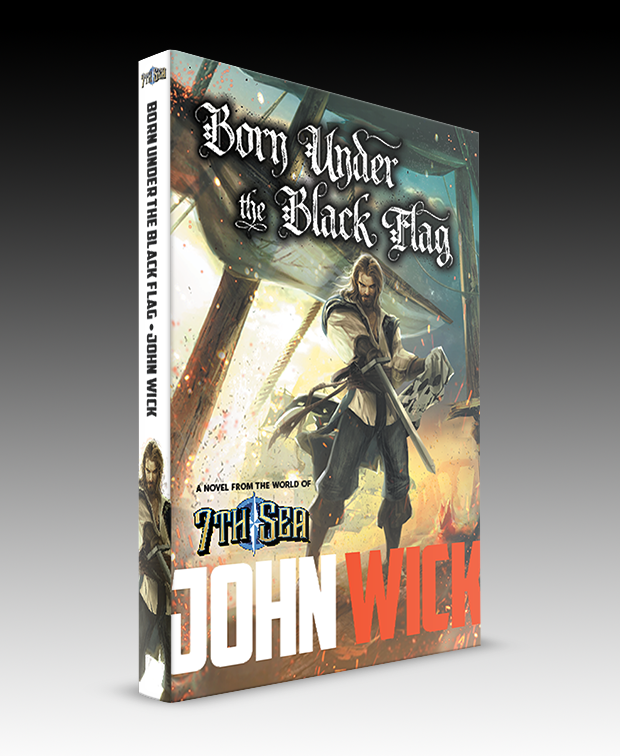 Born Under the Flag Mockup

Vicaro paused. He considered St. Claire carefully. “Are you a man of God, St. Claire?”

St. Claire shook his head. “I’m not trying to get into Heaven. I’m just trying to make up for the evil I’ve done.”

He was the Bane of the Seven Seas. A ruthless villain who killed and plundered every port in Théah and beyond. But something happened to him out there on the waves. Now, he hunts down those who prey on the weak. What happened to transform one of Théah's most notorious villains into one of its most famous heroes?

Born Under the Black Flag is the story of Thomas St. Claire. It begins with his early days as a blood-thirsty pirate and tells the story of his transformation and possible redemption.

Please give us your feedback about Born Under the Black Flag by Sunday, June 4th, 2017 at 10pm Eastern. As before… please don’t email or post in the comments with your feedback. With over 11,000 backers, that would overwhelm our ability to deal with emails and comments. Instead give us feedback via this link by June 4th at 10:00pm Eastern:

We look forward to your thoughts and notes! Thanks as always for helping us make each one of these novels as awesome as they can be.

Last but not least, we’re thrilled to announce the official Kickstarter launch date for the upcoming 7th Sea board game, War of the Cross. The board game Kickstarter represents another huge milestone for John Wick Presents and 7th Sea. It’s because of your support for 7th Sea: Second Edition that we’re able to bring the world of Théah to new audiences...starting with our first JWP board game. 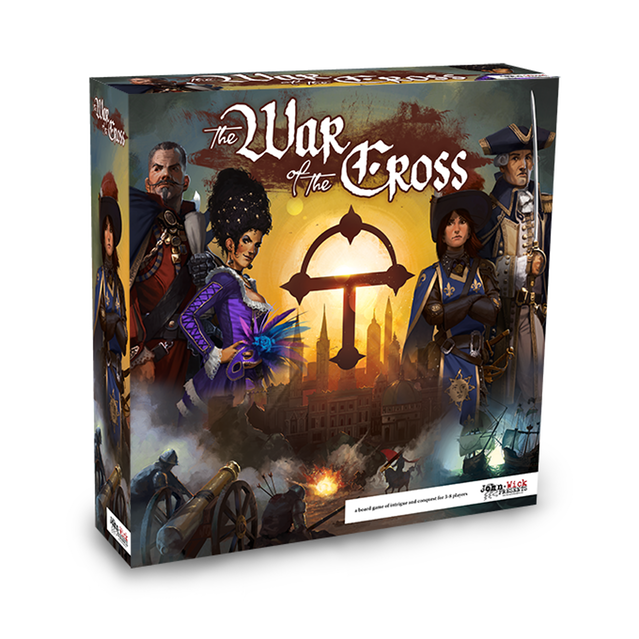 War of the Cross Mockup

We’ll have more details in coming weeks about game play, components and our plans for the game. In the meantime, here are a few preview images courtesy of our Sr. Art Director, Marissa Kelly, including the first peek at some concept art and minis: 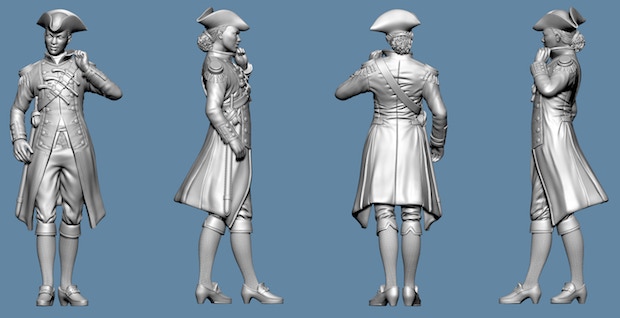 We also have a small preview of the map, courtesy of our amazing cartographer, Mark Richardson, and our awesome layout artist, Thomas Deeny: 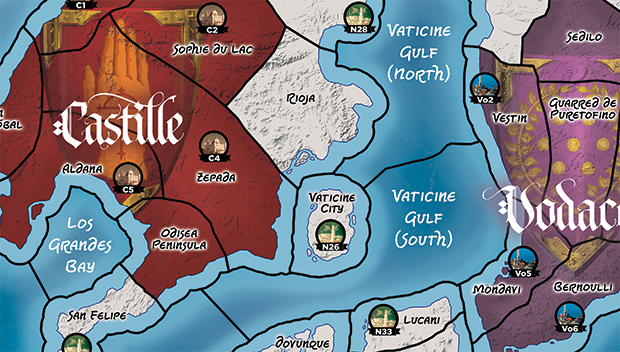 Thanks for your support! You’ve made so much amazing stuff possible, and we’re just getting started!