We’ve got a bunch of new releases for you today: The Explorer’s Society, the final electronic files for Daughter of Fate, and… Pirate Nations in print. Let’s get right to it!

The Explorer’s Society on DriveThruRPG

At long last! Thanks to the amazing efforts of our Marketing Director, Hannah Shaffer, we’ve launched the Explorer’s Society on DriveThruRPG. 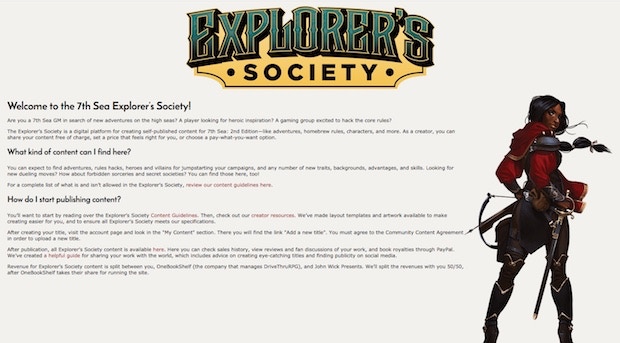 The Explorer's Society on DTRPG

Through the Explorer’s Society, you can create, upload and sell your very own 7th Sea: Second Edition products, including homegrown adventures, Sorceries, Dueling Styles, system hacks and more. As a creator, you can share your content free of charge, set a price that feels right for you, or choose a pay-what-you-want option. All in the world of 7th Sea!

And if you're not a creator... then there's an opportunity for you to connect with creators who are developing a ton of awesome 7th Sea material:

We are incredibly excited to see what kind of awesome resources our fans develop. In fact, we’ve got a small batch of fan products that we’ve helped along a bit (editing, layout) so they could be featured at launch. Here are a few of our favorites:

Expanded Ship Rules by Rob Donoghue - “The Core Rulebook ship rules are wonderful for what they’re supposed to do—get the Heroes into a ship with a minimum of fuss. And that works out fantastically if the ship is an adjunct to the larger game, but if the ship is going to be the center of play, then the table might want a little bit more depth to it.”

High Price of Love by Heather Osborne - “In glittering Charouse, courtly lovers carrying rich presents to their beloved are being waylaid, robbed, and badly injured. The robbers have an uncanny foreknowledge of their victims' gifts and routes, and a disturbing talent for escaping the law. As robberies with violence escalate to murder, it becomes clear that the city needs Heroes.”

Besos de la Araña by André La Roche - “Besos de la Araña is a highly-secretive Sorcery practiced in hiding amongst the Castillians. The Sorcery gains its name from a bandit known only as Araña, a folk hero of legend. Araña stole fortunes from the Church and nobility, and was equally generous in spending her wealth amongst the commoners. Her true name long-since lost to history, Araña gained her moniker due to her infatuation with spiders.”

And there’s a whole lot more to be found on the main Explorer’s Society page!

Over the next year, we’re going to be adding even more cool stuff to the Explorer’s Society, including official 7th Sea adventures, more settings (Aztlan! Ifri!) and even more art for you to use in your adventures. Of course, our hope is that the best stuff there will be all the new products that fans upload!

You can find out more about uploading your own work on DTRPG or you can check out our Explorer’s Society page on JohnWickPresents.com for more information.

The main shipment of Pirate Nations print copies arrived at our office this week! We’re so incredibly proud of this book, especially the work that John and Ben put into developing it, and we’re thrilled to get it out into the world. 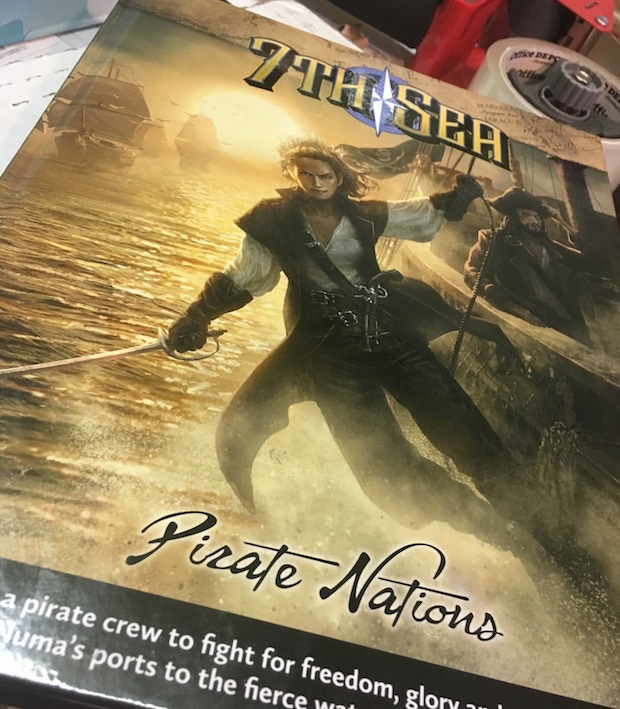 As promised, we’ll be running the delivery for these books through our webstore via coupon codes delivered through Backerkit. We’ve already pushed those coupons out via email, but if you didn’t get an email, you can grab your coupon directly from the Backerkit Digital Downloads page:

Note that your coupon entitles you to free shipping on your book, which applies to any other books you add to your order as well (like an additional Core Rulebook, Heroes & Villains or any other JWP product!) This coupon is also good for one year, so you can wait to use it if you’re about to change your address or want more than one book delivered at a time.

And if you didn’t yet purchase a physical copy of Pirate Nations and want to pick one up… now is a great time to buy your copy direct from our webstore:

Again, huge congrats to the whole crew of Pirate Nations for their work on the book!

In addition to getting print copies of Pirate Nations out today, we’re also delivering the final electronic versions of Daughter of Fate, the first 7th Sea novel. 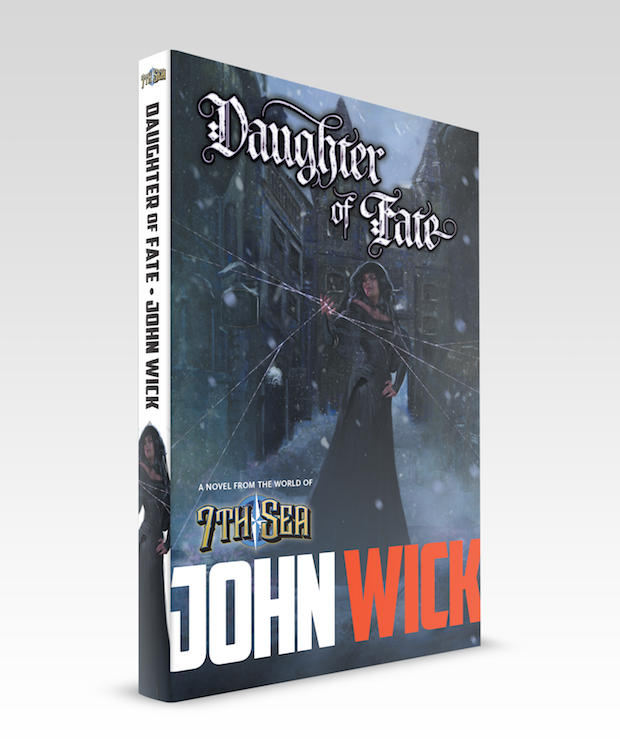 As with the Pirate Nations codes, the novel has been pushed out to backers via Backerkit. If you didn’t get an email, you can grab the files (ePub, .mobi, and PDF) directly from the Backerkit Digital Downloads page:

If you haven’t had time to read the novel… make some time. John has done an amazing job bringing the world of 7th Sea to life, and the journey of Elena from the lands of Vodacce to the life of a Hero is a really, really fun read.

Here’s a snippet from the first chapter, as Elena learns what being a fate witch means from her grandmother:

Elena sat quietly as many men and women walked about her father’s house. She sat with Nana and watched.

The woman’s presence was like a shadow now. Ever present and subtle. Sometimes Elena even forgot she was there. But she was always there. Just a step behind her. A shadow. Mother was pregnant again and all her family had come. Uncles, aunts, cousins. All of them. People she had never seen before and people she had seen perhaps only once. But they all knew her name and they all greeted her like they had known her all her life.

Her eyes changed focus. As if she was trying to see through the people.

Elena raised a hand but Nana slapped it down, moving with a speed Elena had become accustomed to, but still caught her off guard. “Do not point. Only speak.”

Elena’s eyes focused on a man speaking to her father. She saw the strand linking them, shimmering like a spider web with droplets of sunlight.

“He owes my father money,” she said.

Elena shifted her gaze, looking at the strands. Desire. Authority.

Each its own shimmering color.

Elena saw some of the women watching her. Their eyes trembling.

“Not all of us have the Gift,” Nana said. “And those who are not pretty enough or wealthy enough are simple slaves.”

Elena shut her eyes. Took a breath. When she opened them again, the world was simple. Just men and women. No strands. She looked at Nana. “What happens to the ones who aren’t...”

“If a woman does not have the Gift, she can still be a wife if she is rich or pretty enough. But those of us who are daughters of fate, we are selected first.” She waved her hand. “Others go to the streets and earn a meager living as whores.” Nana said, “Look again. Tell me what you see.”

Elena shifted her gaze, focusing on a woman speaking to her brother, Ignazio. The woman was older...as old as her own mother.

“She wants something from Ignazio,” she said.

Nana nodded. “What is it she wants?”

Elena opened her eyes and looked at Nana. “Some things should be private.”

“Not to us,” Nana said, a small grin on her lips. “Nothing is secret from us, dear. That is why you are so desired as a wife.” Nana put her thin, fragile finger up to her lips. “Because no one can keep a secret from us.”

Want to find out how Elena breaks the oppressive rules of Vodacce society to become a pirate, spy and Hero? Read the book!

We’re sending the novel to the printer this week, so please let us know right away if you catch any final typos. Backers who ordered the print copy should receive their books (via coupon codes) in late April, and we’ll put additional copies up for sale on our webstore.

Yup, we meant it when we called this “The Year of 7th Sea” in January! And there’s more to come. Stay tuned for our next production update in mid-April. We’ll have more information then about the final PDF for Nations of Théah, Vol 1 and 2, the Pirate’s Booty shipment with dice/decks/tokens and more. Thank you all for your support!