As with last month, we’ve got a lot to talk about. Our staff has been hard at work since our last update! Let’s get to it...

Here’s a list of this month’s update to the official 7th Sea production schedule:

We’ll be making continued updates to the production schedule throughout the month. Check that page often if you want the latest info about where each project stands. In general, we’re making good progress on all the pieces of the project, and we’re excited to start releasing sourcebook content every four to six weeks starting in November.

We're also excited to officially send the Pirate's Booty materials (dice, decks, etc) to the printer this month. We're working with KrakenPrint to make sure that all the materials are really great, and we should have some more news on that schedule in early November as well.

Now that Heroes & Villains is at layout, we’ve got a few sample pages to share with you. We’re incredibly excited about this book, both because it provides a wealth of NPCs and pregenerated Heroes...and because it’s going to have a ton of awesome art. 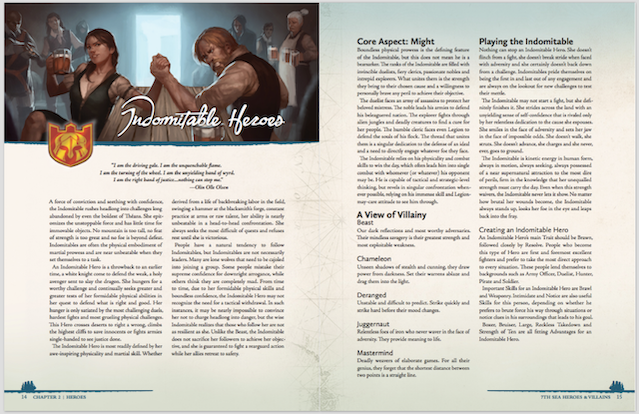 Each Hero or Villain will be featured on a single spread: 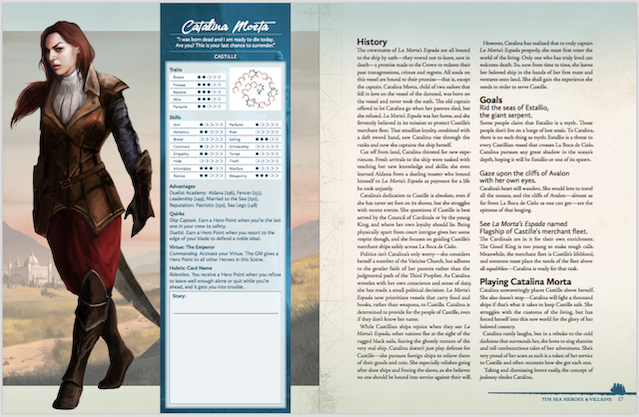 We’ll have the full book available for you all to proof (before it goes to print) in early November!

While we’ve put a huge focus this last few months on outlining, developing, and writing sourcebooks, we’re also thinking a lot about the other stretch goals you all funded, including the community achievements. Today, we’re proud to announce that the JWP Redbubble store is up and running: 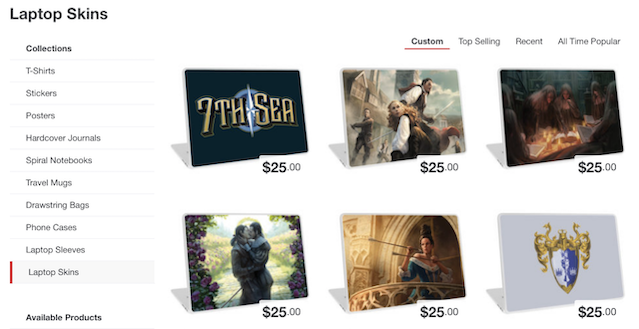 Thanks to Hannah Shaffer and Marissa Kelly, we’ve got travel mugs, laptop skins, phone cases, and so much more. Check out the store, and let us know if there are other images you’d like to see on Redbubble gear!

As we noted a little over a week ago, there’s still time to back the first 7th Sea computer RPG:Voyage of Fortune’s Star. While the Kickstarter project has a ways to go before it funds, there’s still time left to help the ship reach its destination. Here’s a bit more about the awesome story that will come to life if the project funds:

Captain of the feared pirate vessel Fortune’s Star, former Vodaccan duelist Anzolo Zorzi has a fearsome reputation, a loyal crew, and one of the fastest blades in all of Théah. But he also has a heart of gold. When he arrives at the scene of a naval battle to claim plunder from both winner and loser but salvages only an enormous stone sarcophagus that floats on the water, Anzolo has no notion that he’s embarked on the strangest—and most dangerous—voyage of Fortune’s Star.

Anzolo expects to recover gold and jewels from the sealed tomb, but instead discovers a most surprising and long-missing clue that may allow the renowned Kreuzritter to defeat the legendary Schattenmann, a scissors-fingered creature that terrorizes that forests of Eisen. Unfortunately for Anzolo, and perhaps for the knights as well, the Kreuzritter require the pirate’s assistance.

Fortunately, Anzolo has a guardian angel looking over him. Magdalena Salvaza is the Fate Witch currently entrusted with the generations-old duty of waiting for this moment. The Fate Witches of her line expected to guide someone of greater character than Anzolo Zorzi, but Magdalena’s confidence in the pirate captain grows as she learns about his past and as she observes him in the present. Even as Anzolo faces dangers, forces allied with the Schattenmann understand that defeating Magdalena is the true key to foiling the Kreuzritter’s ancient plans.

In addition to Heroes & Villains, there are a few other projects coming along that will hit your inboxes soon:

Thank you again for all your support! We're so excited to see the 7th Sea community grow and grow as we release all of the awesome stuff you've funded. Thank you!