We've got a big update today: a New World preview, our September production update, a new adventure up on DTRPG by Tobie Abad, and more! And we're only five days away from the launch of the Khitai Kickstarter on October 3rd...

The Crescent Empire has shipped to backers, so it’s time for us to turn our attention west! After a long journey across the Trade Sea and through the Atabean, past Villainous ATC ships… we have finally reached the mysterious and amazing continent of Aztlan! 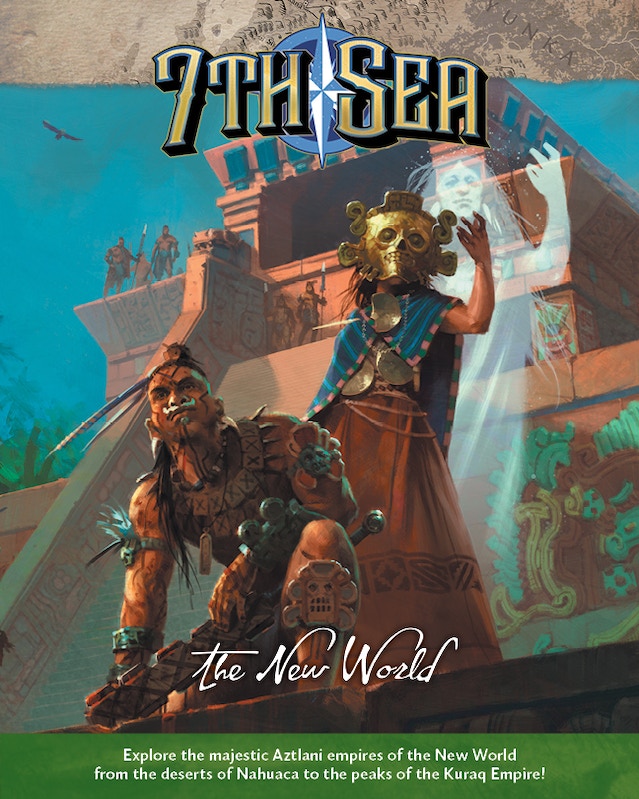 Huge thanks to Danielle Lauzon who stepped up as a developer on this book when my schedule got incredibly busy this year. It's been such a pleasure to see her take this book to completion, and an honor to work with all our writers and devs on this project!

As before… please don’t email or post in the comments with your feedback. With over 11,000 backers, that would overwhelm our ability to deal with emails and comments. Instead give us feedback via this link by October 8th at 10:00pm Eastern:

We’ll be sending this book to the printer in late October, so look for final PDFs before the end of the month, and printed books around the 1st of December. Welcome to Aztlan!

As our dev teams gear up for Khitai, our production teams have been hard at work on keeping things rolling for our existing projects. Below are the updates for changes in status; remember that you can view the full production schedule here:

The Crescent Empire is done! Look for the book in stores on October 4th. Now that Gen Con 50 is behind us, we’ve made some wonderful progress on our current books: The New World, Lands of Gold and Fire, and The Colonies have all see serious progress since our last update.

Mark Richardson has nearly finalized the Aztlan map (for The New World), so we’re down to our last incomplete map: The Colonies. He’s working with our dev team to address all of their notes, and we expect him to finish in the next few weeks. Once that’s done, we’ll get the maps printed and shipped to everyone!

John is back to work on The Gossamer Empire, and he expects to deliver a new draft of the novel to his editor shortly. Since we’re already on our second editing pass, look for digital copies of that novel before the end of October and print copies by the end of 2017. We're still working on proofs for the hardcover versions, but we expect those to ship soon!

John took some time out of his busy development schedule to join Satine Phoenix on GM Tips:

"I recently drove to Los Angeles to join Satine Phoenix on her GM Tips Youtube show. I got to teach Satine some rather unconventional GM tricks and techniques. Most of her guests are Dungeon Masters, so much of the advice was geared toward D&D players. She told me, “I want you to bring the pain!” So, I did. Wait to the end of the episode and see what I did to her favorite character..."

The Children Cry on DriveThruRPG

In addition to all our Kickstarter released material, we're also proud to present our first adventure for Pirate Nations, The Children Cry by Tobie Abad, now live on DriveThruRPG! 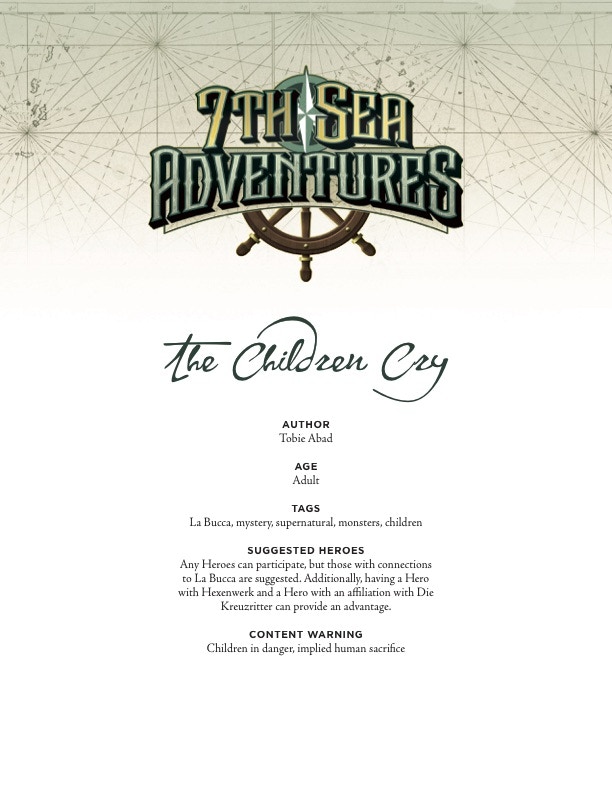 Children are disappearing on the island nation of La Bucca, victims of a being they call the Bogeyman, the subject of nursery rhymes and fairy tales. They need Heroes to venture out into the night and battle the monster who preys on them, but is that monster really a slavering beast haunting the island's coasts... or does it roam somewhere much closer to home?

You can pick up this new adventure for 7th Sea on DTRPG:

Thank you to everyone who filled out the Khitai quickstart survey with your questions and feedback. We’re processing those results and plan to publish a blog post addressing the most common questions.

If you haven’t downloaded the quickstart yet, you can still do so for free on DriveThruRPG. If we make updates to the quickstart, those updates will be automatically pushed through to your DriveThru account.

With that, there’s just five days left before 7th Sea: Khitai launches on Kickstarter on October 3rd. Everyone at JWP has been funneling energy, excitement and planning into making this campaign a huge success. It was with your help that 7th Sea: Second edition made waves, and with your backing and enthusiasm Khitai will be no different.

We’ll push out another update when the campaign launches next Tuesday. Thank you for joining us on the next chapter of our 7th Sea adventure!

There's a fun entirely new ruleset in this to try out elsewhere: Hazards are a new type of 'antagonist' that represent things like a storm at sea, a haunted house or just a trek through a dangerous jungle.  They can be used on their own, or added into an action scene which already includes Villains, Monsters or Brutes.

Not to mention, 3 nations, 2 kinds of sorcery, half a dozen Duelist Styles, over 20 new Advantages (I like the unique Nahacuan one: Adorn with Feathers :) ), 9 Arcana and a selection of Ship items.